Because the English language is based upon many different languages from different times and places, some letters and sounds overlap. We call these letters “borrowers” and we seek to teach them to our students in memorable ways. The letter ‘C’ is the first of 5 borrowers in our program. It can be pronounced two different ways. The most common is the /k/ sound, as in “cat.” It can also be pronounced /s/, as in “cent.”  This concept is introduced using the visual memory aid of train tracks.

Tutor: Borrower C makes different sounds based on what letter comes after it. We will use a picture of a train to help us remember the rule. Trains run on tracks, but the ‘C’-train runs on tracks with letters.  What sound do you think ‘C’ makes most of the time?

Tutor: You’re correct!  (point to ‘K’s on main track.) But just like any other train, the ‘C’-train can change tracks.  When it does this, it has to borrow a new sound.  What other sound can ‘C’ make?

Tutor: Super job!  (point to ‘S’s on track)  Now, whenever a train changes tracks, there needs to be a sign that tells the engineer where they’re going.  Most sign posts have numbers, but as you’ve probably guessed, the ‘C’-train’s track has letters!  There are three magic letters that allow ‘C’ to change tracks.  They are ‘I,’ ‘E,’ and ‘Y’. Whenever one of the magic letters is behind ’C,’ the ‘C’ changes from the /k/ track to the /s/ track.  (Demonstrate a few sample words, such as city, cycle, cent.)

Tutor: In each case, the ‘C’ made the /s/ sound because it had one of the three magic letters behind it.  Now let’s look at some nonsense words and real words that use Borrower C. 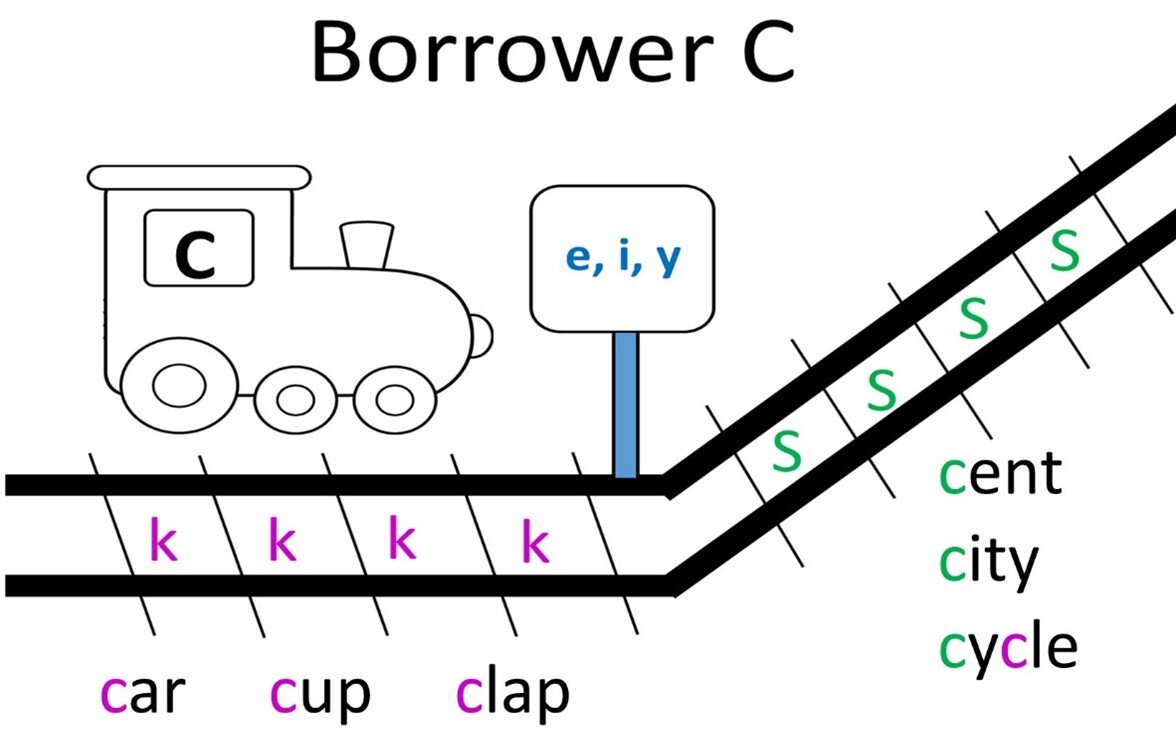 The Borrowers: Part One -The Letter Y

The Borrowers: Part Three – The Letter G
Scroll to top