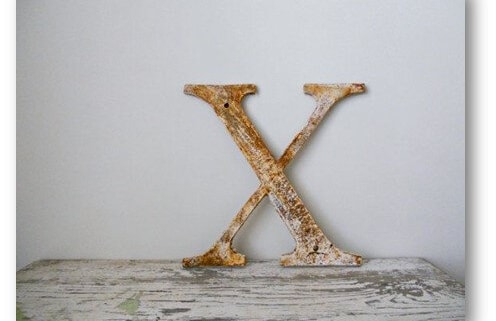 Let’s be honest: thinking of a letter borrowing something is pretty absurd.  Especially when the thing it’s borrowing is another letter’s sound. This concept is even more strange for students who are just beginning to learn about the English language and how letters function on their own and within individual words.  Pair that with affixes, endings, and tense changes and it’s no wonder students and nonstudents alike struggle all over the world to grasp the basics of English. By breaking down some of the trickier letters in the English language, students are able to use this newfound understanding to approach unknown words that may utilize these tricky letters.

One of those letters that is better understood with the ‘borrower’ concept is the letter ‘x’.  On its own, letter ‘x’ doesn’t actually have a sound.  Well it does, but that sound is the combination of two other letters’ sounds from the English alphabet: ‘k’ and ‘s’ which, combined says /ks/.  Read these two words and see how this applies: ‘fax’ versus ‘faks’.   They sound the exact same even with obvious spelling differences.  To make things even more difficult, the /ks/ sound that ‘x’ makes only applies when ‘x’ falls in the middle of the word or at the end of a word, and even then, there are rules to know to clarify exactly when that sound will occur.

Before diving into that, think about a word with ‘x’ at the beginning, and the word ‘X-ray’ does not count.  Here’s a few: ‘Xerox’, ‘xylophone’, and (look up words with ‘x’ at beginning). Those words are not said with a /ks/ sound for the ‘x’; they are said with a /z/ sound. As of right now, we have two separate sounds for the letter ‘x’ using three different letters (‘k’, ‘s’, ‘z’), and there is still one more sound to consider.

Now, read these words: ‘example’, ‘exit’, ‘exemplary’.  Do you hear a /ks/ sound?  What about a /z/ sound? Hopefully you answered yes to the second question, but also realize that it isn’t as simple as a single /z/ sound.  In the previous three words, look at the letters that come directly after the ‘x’ – all of them are vowels.  When a vowel comes after an ‘x’ in the middle of a word, the /ks/ sound that would normally occur changes to a /gz/ sound because a person’s vocal cords are now being used immediately following the ‘x’, thus the sound of the ‘x’ changes as well.  Compare that to a word where the ‘x’ is followed by a consonant (ex. ‘explain’, ‘explicit’, and ‘excellent’), and the difference in that ‘x’ sound becomes more apparent.

At this point, in total, the letter ‘x’ uses a combination of four other letters’ sounds: ‘k’, ‘s’, ‘z’, and ‘g’.  Being able to understand why and when this happens within the English language gives students, struggling or not, a better grasp on how to read words they are unfamiliar with that use ‘x’.  Not only that, but students can also apply this rule to spelling when they are writing and using words that have ‘x’ in them. By having these ‘borrowing’ concepts explained, the surprise of varying sounds from individual letters is better understood and allows the student to be prepared rather than caught off guard or unsure. Below is an example dialogue for introducing this concept.

Tutor: “The next borrower we are going to learn is X.  Borrower X is a lot like Y in that it borrows different sounds depending on where it is in the word.  So once again, what are the 3 places X could be at in a word?”

Tutor: “You got it!  So I am going to draw a card with three boxes on it.  One for X at the beginning, one for the middle and one for the end.  Can you think of any words that begin with X?”

Tutor: “That’s a word I thought of too.  But here is the problem.  X-ray is spelled with a hyphen, so it truly doesn’t begin with the letter X.  And besides, do consonants ever get to say their name?”

Student: “I suppose they don’t.”

Tutor: “Let’s think of a word like xylophone.  What sound is X borrowing in that word?”

Tutor: “You’re right!  At the beginning of a word, X will borrow the /z/ sound.  Was it kind of hard to think of words that begin with X?”

Student: “It was unbearably difficult.”

Tutor: “The reason is that X is very rare at the beginnings of words. (The tutor may opt to show the student just how few words there are in the dictionary that begin with X.)  However, many more words have X in the middle….”

The tutor should now repeat this process for words that have X in the middle and end. 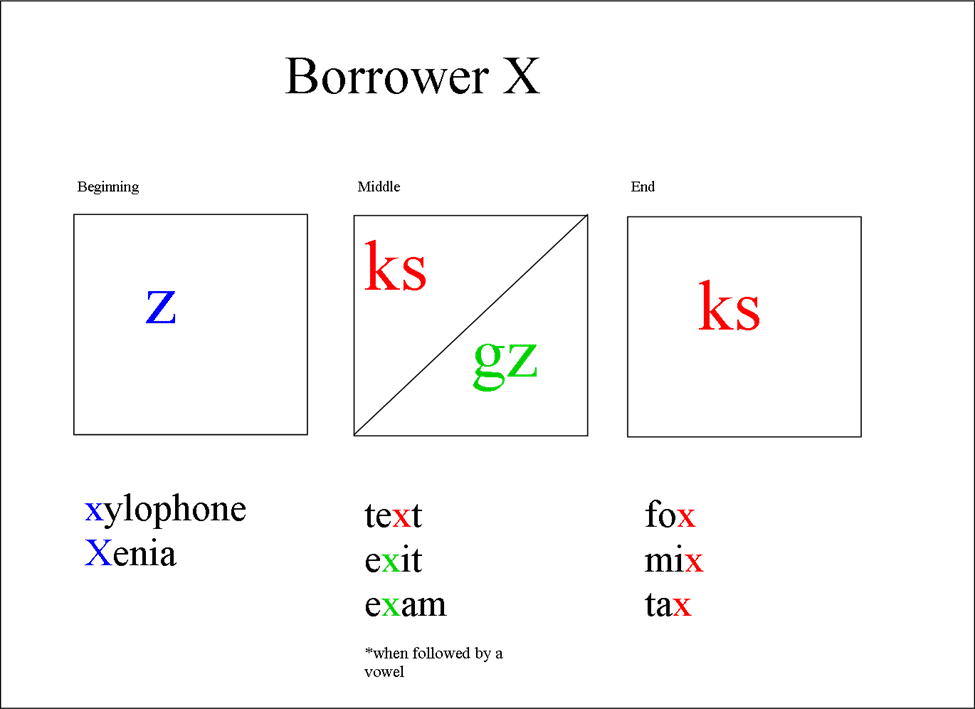 The Borrowers: Part Five – The Letter Q(u)
Scroll to top