When you think of the letter ‘q’, what sound do you think of this letter making?  Are you able to think of a word that doesn’t have a ‘u’ directly following the ‘q’? Pretty difficult, huh? Most words that exist in English with a ‘q’ and no ‘u’ are derived from Semitic languages and are considered loanwords (a word adopted from one language and incorporated into another language without translation – for example, “Iraq”, “Qur’an”, and “Qatar”). The digraph (a digraph is a combination of two letters that create one sound) ‘qu’ has a lot of history to it, and to fully understand why so many words need a ‘u’ following the ‘q’ in the English language, one has to understand the origins of letter ‘q’ and the original functions associated with this letter.

It is no secret that the English language has been influenced by a variety of other languages. While English is not a Romance language like French or Spanish (which are heavily influenced by Latin), English takes a lot of different concepts from those two in addition to German, Latin, and many more.  The letter ‘q’ in particular is derived from Ancient Greece, specifically the Greek letter Koppa -pictured in a few forms below – and as you can see, ‘Q/q’ resembles the same shape as Koppa.

The other major influence of ‘qu’ in the English language has to do with the Norman invasion of England in 1066.  Once the Frenchmen invaded England and took control, they began changing the spelling of words within English that were spelled with ‘cw’ to ‘qu’.  For example, the word ‘queen’ was originally spelled as ‘cwen’ in old English.  There are also words that we use in English that are derived directly from the French language and are expressed with the addition of ‘e’ to ‘qu’ which reverts this digraph back to the original sound for the letter ‘q’: /k/.  This spelling only comes at the ends of words in English. Consider the words: ‘unique’, ‘bisque’, and ‘antique’.

Now that we’ve had a brief history lesson on the origins of the ‘qu’ diagraph, let’s talk about how we can break down this combination to better understand the functions and uses of ‘qu’ within the English language. Standing alone, the letter ‘q’ makes a /k/ sound.  Pair that with the letter ‘u’ (/u/), and the sound that is created is /kw/, hence why we refer to this ‘rule’ as a ‘borrower’.  Consider the words: ‘queen’, ‘quiz’, and ‘equal’; whether at the beginning or in the middle of the word, the ‘qu’ sound does not change.  Then, we talk about how, when ‘qu’ falls at the end of a word, the letter ‘e’ is required so that the sound then becomes /k/.

By breaking down the understanding of the letter ‘q’ with the addition of ‘u’ and then ‘e’, students are better able to decode unknown words with this tricky digraph. Phonics is essentially the system behind how letters function on their own and with other letters, and is an invaluable tool for students who struggle due to Dyslexia. Below is an example dialogue for introducing this concept.

Tutor: “Q is an interesting letter in our language.  It happens to be the only letter that cannot exist on its own.  Do you know what letter always follows Q?”

Tutor: “Correct!  Q must always be followed by U.  Just like with borrowers X and Y, Qu borrows different sounds depending on where it is located in the word. So, what are the 3 places Qu could be found in a word?”

Tutor: “Are you a mind reader?  Right again!  Can you think of any words that begin with Qu?”

Tutor: “Perfect!  Now, let’s think about what we hear at the beginning of each of those words.  What sounds was Qu borrowing in each?”

The tutor will repeat this process for the middle and end, being very careful to emphasize that no words end with –qu, so we have to use –que instead. Also, note that the ‘e’ does not jump over a vowel to make it say its name.

Tutor: “Now let’s look at some nonsense words and real words that use Qu.” 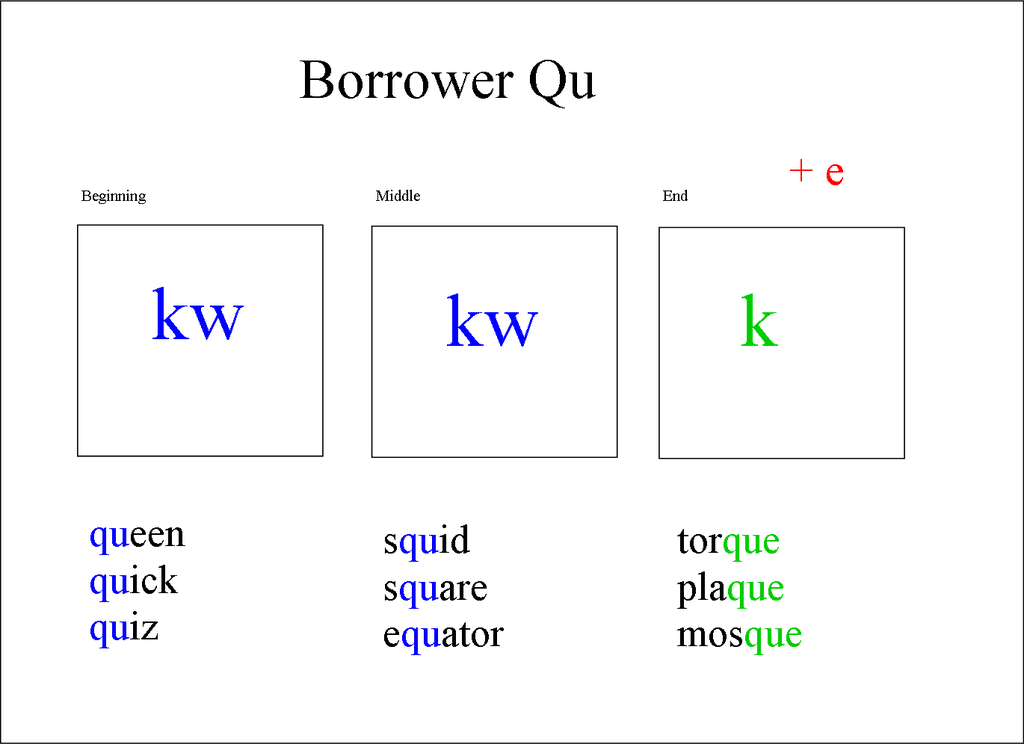