You are here: Home / Dyslexia

Dyslexia is a learning disability that causes an individual to have difficulty when reading. A common misconception is that a person with dyslexia sees letters that are switched around or backwards – while this is true for some dyslexics, not every person with dyslexia experiences the same symptoms and difficulties with reading.

For example, people who are dyslexic may also struggle with reading comprehension, writing, spelling, and even math. Young dyslexics also tend to struggle with other things unrelated to reading, like attention span, sequencing (remembering things in order), motor control, and left and right confusion leading to wider issues affecting social interaction, memory, and dealing with stress. Dyslexics can end up struggling with everyday activities that most people take for granted because of the far-reaching issues stemming from dyslexia within a person’s life.

The Science of Dyslexia

While science is constantly evolving and creating new insight into dyslexia and its effects, researchers have not yet determined what exactly causes dyslexia. What they do know, however, is that dyslexia is genetic; in other words, a child is more likely to develop dyslexia if one of their parents is dyslexic. Furthermore, if that child has any siblings, there is a 40% chance that the sibling could also have problems reading.

The specific cause of dyslexia has yet to be discovered, but researchers are getting closer to understanding exactly which parts of the brain are affected. As a preface, when a person is reading, both hemispheres of the human brain are active, but the left hemisphere does most of the work. A variety of pathways are created during the reading process, and each has a specific function – for instance, there is a pathway that facilitates ‘sight recognition’ (recognizing a word just by looking at it rather than breaking it down by individual sounds), which leads to another developed pathway that allows the reader to remember the meaning of that recognized word; this results in a series of connections leading to the facilitation of speech, articulation, and pronunciation. All of these processes happen simultaneously throughout multiple lobes of the brain becoming fluid for a fluent reader. 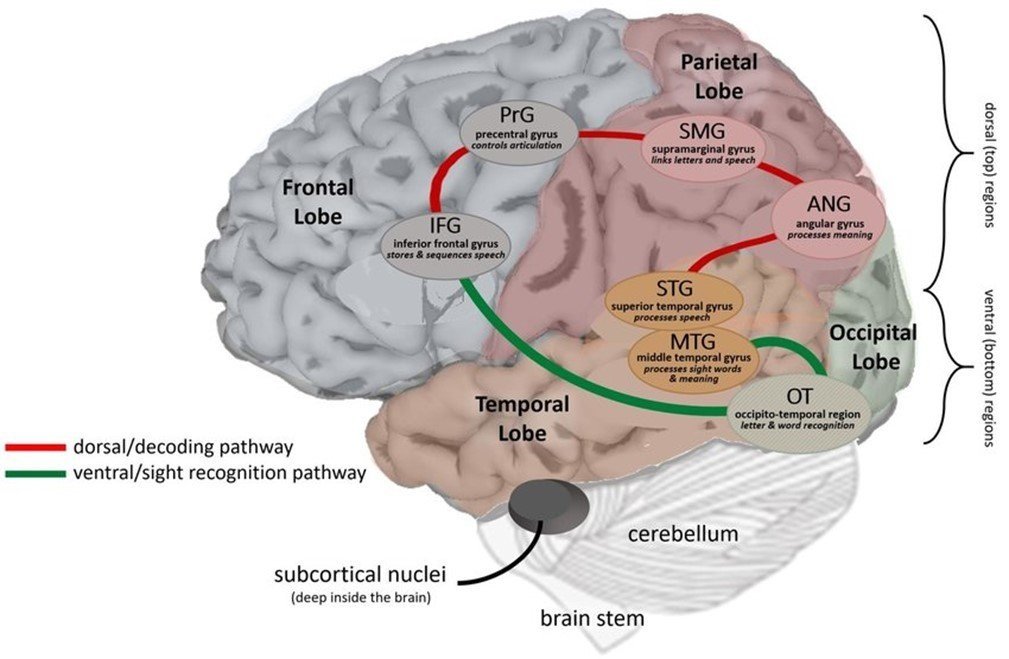 For someone with dyslexia, these internal pathways and connections are disrupted and don’t create the same patterns that a brain without dyslexia creates. There is little understanding as to why these interruptions occur, but researchers have found that the left hemisphere of the brain in a dyslexic person lacks the necessary connection to facilitate the fluid pathways which allow a reader to become fluent. Instead, the right hemisphere begins to overcompensate and work harder to create those connections that are needed to read and comprehend. Below is a graphic that shows the activity in a brain of a non-dyslexic reader versus that of a dyslexic reader.

Unfortunately, dyslexia cannot be cured. People who have dyslexia will have it for their whole life, but that doesn’t mean it will always be a struggle for them to read or cope with their dyslexia. One way to get a student on the path to learning the techniques necessary to become a fluent reader is a diagnosis, and the earlier the better.  The longer dyslexia goes undiagnosed, the longer the student goes without understanding why reading is more difficult for them. This misunderstanding will often create a ripple effect in the student’s life.

Diagnostic criteria for dyslexia include difficulties with phonological processing: the ability to hear the difference between sounds, sequence sounds, hold sounds in memory, retrieve sounds associated with a symbol from long-term memory, and decode and spell sounds and words. It results in slowed progress in learning to read and spell, slower reading rates, and may cause difficulty with reading comprehension.

Dyslexia can also affect retrieval of other forms of written information (information coded without much meaning), which can also impact the retrieval of math facts. Students with academic skills affected by dyslexia score significantly below their peers. This can be confirmed with individually administered comprehensive psychoeducational assessment.

Despite dyslexia causing problems for learning and even seemingly simple day-to-day tasks, dyslexia does not affect intelligence. Many famous, successful people are or were known to have dyslexia including Albert Einstein, Robin Williams, Richard Branson, Anderson Cooper, and Steven Spielberg, to name a few. Dyslexia creates challenges, but it does not stop a person from experiencing success in academics and in life, or like the people named above, from changing the world.

Dyslexia is also much more common than one might initially believe. Research has found that nearly 18% of the population is dyslexic. That is almost 1 out of every 5 people! There are plenty of resources including books and videos to help understand the possibilities of overcoming Dyslexia, and there are numerous organizations such as the Colorado Reading Center that offer professional services in this regard.

There is a bright future for all people that struggle with dyslexia, and we at the Colorado Reading Center are proud to help them reach their full potential.